Sovereignty, Legitimacy, and the Formation of New Polities after the Great War 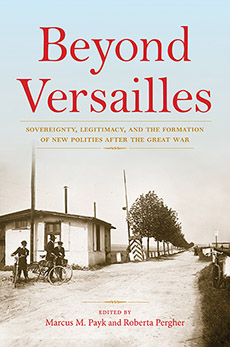 The settlement of Versailles was more than a failed peace. What was debated at the Paris Peace Conference of 1919–1920 hugely influenced how nations and empires, sovereignty, and the international order were understood after the Great War—and into the present. Beyond Versailles argues that this transformation of ideas was not the work of the treaty makers alone, but emerged in interaction with nationalist groups, anti-colonial movements, and regional elites who took up the rhetoric of Paris and made it their own. In shifting the spotlight from the palace of Versailles to the peripheries of Europe, Beyond Versailles turns to the treaties' resonance on the ground and shows why the principles of the peace settlement meant different things in different locales. It was in places a long way from Paris—in Polish borderlands and in Portuguese colonies, in contested spaces like Silesia, Teschen and Danzig, and in states emerging from imperial collapse like Austria, Egypt, and Iran—that notions of nation and sovereignty, legitimacy, and citizenship were negotiated and contested.