Women and Power in Modern Romania 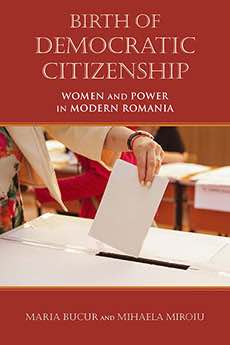 What is it like to be a woman living through the transition from communism to democracy? What effect does this have on a woman’s daily life, on her concept of herself, her family, and her community? Birth of Democratic Citizenship presents the stories of women in Romania as they describe their experiences on the journey to democratic citizenship. In candid and revealing conversations, women between the ages of 24 and 83 explain how they negotiated their way through radical political transitions that had a direct impact on their everyday lives. Women who grew up under communism explore how these ideologies influenced their ideas of marriage, career, and a woman’s role in society. Younger generations explore how they interpret civic rights and whether they incorporate these rights into their relationships with their family and community.

Beginning with an overview of the role women have played in Romania from the late 18th century to today, Birth of Democratic Citizenship explores how the contemporary experience of women in postsocialist countries developed. The women speak about their reliance on and negotiations with communities, ranging from family and neighbors to local and national political parties. Birth of Democratic Citizenship argues that that the success of democracy will largely rely on the equal incorporation of women in the political and civic development of Romania. In doing so, it encourages frank consideration of what modern democracy is and what it will need to be to succeed in the future.